In our busy and hectic lives, it’s easy to overlook the silly little things. When it comes to enriching our minds, we watch TV and play games. But, far too many people ignore their body’s enrichment. The result is boredom and tiredness, and even weight gain. Most sports are a little too slow-paced and boring for a lot of folks, so they need something different.

The answer to this can be found in Bubble Football. A game played by maniacs and businessmen alike. This game offers a fresh take on older, traditional sports. And gives players a chance to unleash more fury that they otherwise would.

Bubble football is played much like regular football. You have two teams, who compete against each other. The game is played on a rectangular pitch, with a goal at either end. Both teams are assigned half of the field each. Teams must protect the goal on their side, while also trying to get the ball into the goal on the opponent’s side. Points are earned for each goal scored.

Just like normal football, you can choose to have players in different positions. Some players will stand in the middle of the pitch, and be responsible for trying to score goals. Other players will hang back further, to protect their own goal. 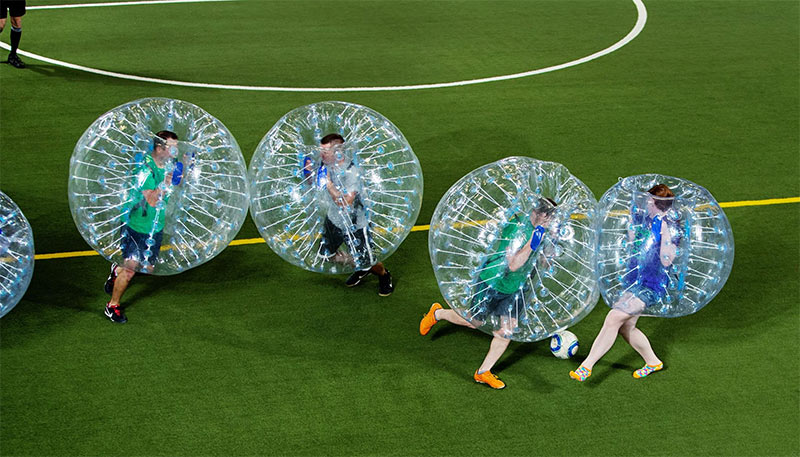 The main difference between regular football and bubble football is the clothing. In bubble football, you wear a large bubble. The bubble is made of plastic and is filled with pressurized air. This outfit only leaves your legs free, allowing you to run and kick. Other than those movements, you’re restrained.

Due to the air that fills the bubble, they’re very bouncy. This makes any collisions during play explosive, usually leaving both parties on the floor. The suit also makes it hard to see below and around you, so kicking the ball is a challenge in itself. To win a game of bubble football, you need good teamwork and a well-coordinated strategy. Players must communicate with each other, to help find the ball!

Ideally, if you want to take on bubble football as a long term interest, you’ll need a regular team. Each team member will need their own bubble, and they’re not worth buying for one or two games. Thankfully, teams can be made from as little as three people, although, five would be advised. You may also have to assemble a second team, to play against if there’s no other teams in your area.

Buying a bubble football suit isn’t a problem. The sport has become very popular over the last few years so you can find loads of new and second-hand options available. Use the internet and local shops as resources to find the best deals! You can often buy bulk lots of suits; which is great for a new team.

Just to try the sport, loads of companies can host games for you. This way, you don’t have to buy your own equipment. It will also give you a chance to make sure that all of your new team mates enjoy the game, and would be willing to play longterm.