My secret is out. Sat at the dinner table this evening, the conversation turned to being scared. The bad guy in Kung Fu Panda was too much for my eldest, so to ease her woe, my wife told my children that I am scared of spiders. I had managed to hide it until now and retain my position as the biggest and bravest in the house. I have a love-hate relationship with spiders. I am one of the many arachnophobic dads out there that can’t deal with spiders that run at you, it’s just unnatural. I am however, fascinated by spiders and quick to sing their praises to my children as they eat all the disease carrying flies. 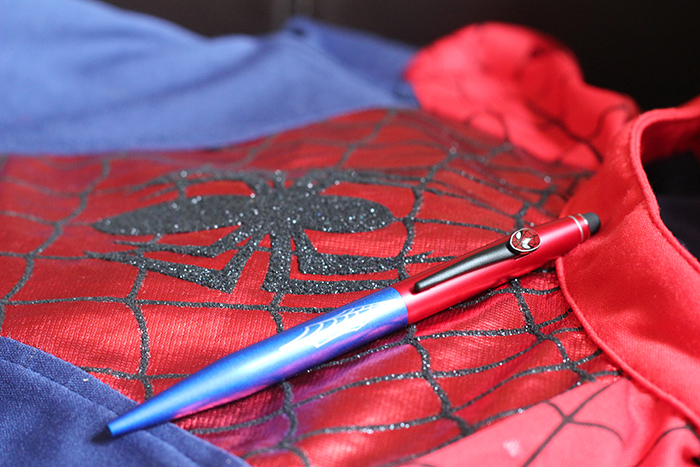 As we discussed my dislike of spiders, my youngest looked distraught and asked if I didn’t like Spider-Man as well. Spider-Man is her favourite superhero. We have the toys, colouring books, disney infinity character and the ‘spider girl’ dress… and yet she has only watched the first episode of the 1967 cartoon series once. Lucy, my eldest has two favourites Spider Woman (after watching a couple of episodes of the 1979 cartoon) and Black Widow after seeing a clip of her calm down the Hulk on YouTube and playing her on Disney Infinity. I don’t have the heart to tell her about Black Widows back story. However, the fact that both my girls favourite superheroes were spiders-related made me chuckle. 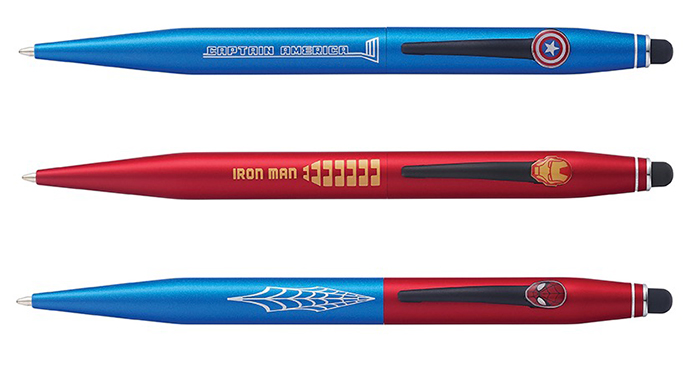 I have bought quality pens for others, but never received one myself. It is a great ‘dad’ present. My power drill will rarely see the light of day and my axe only comes out once a year to chop up the Christmas tree. A pen is a tool I can get on board with. I had heard of the Cross brand after seeing their amazing Star Wars collection. The £80 multi-function Darth Vader pen with a black pen, red pen, pencil, eraser, and digital stylus got me very excited.

When they announced they were doing a brand new range based on the Marvel Universe, my geek sense stared tingling.  This launch coincides with the new Marvel movie, Captain America: Civil War, which opens in cinemas April 29th. The new range features the most prominent icons of the movie; Captain America, Spider-Man and Iron Man. I choose Spider-Man and was over the moon when I saw it. Displayed in a Marvel themed gift box and finished in a very cool metallic lacquer, this is the coolest pen I have ever owned. All of the pens in this range come in either the evolutionary Century II rolling ball style or the Tech2 style, which transforms from a ballpoint pen to a stylus in a flash.

With Father’s Day only a couple of months away, I would happily recommend that a high quality pen should be on the list. If you know a daddy geek like me, a Marvel pen that works on both paper and tablets is both cool and practical. The Cross Marvel collection can be purchased online at www.cross.com and at select retailers. You can access the online store locator for more details.

When I showed my girls my new pen, it was soon taken from me. I was so proud to see them wow at the fact we had a Spider-Man pen. I soon pinched it back and I think I was back in the good books… despite being scared of spiders.